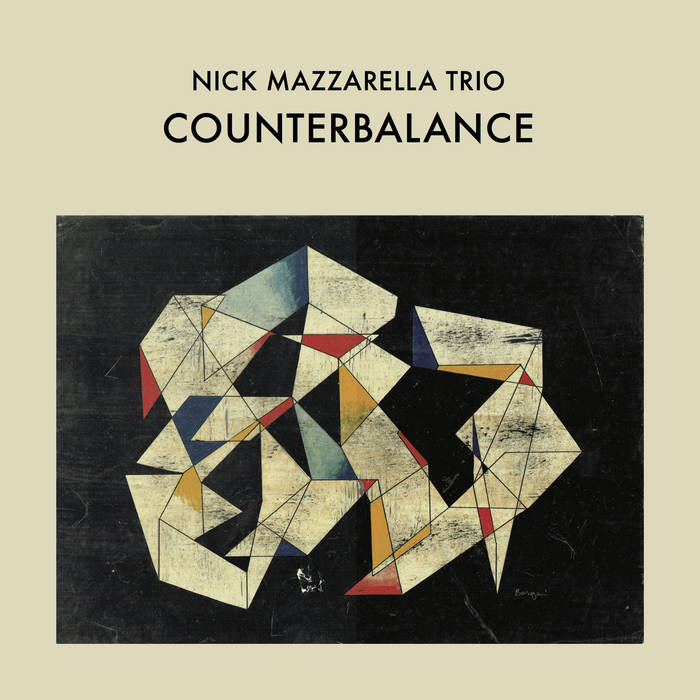 Scottie McNiece this was a magical night..

The Nick Mazzarella Trio was formed in 2008 and for several years remained one of the most active working bands in Chicago’s vibrant jazz scene, performing regularly at clubs and festivals across the city, and recording three albums before drummer Frank Rosaly moved to Amsterdam in 2016. When Rosaly returned for a visit in early 2018, Mazzarella composed a suite of six new pieces for a concert commemorating the trio’s tenth anniversary. That performance, given before a full house at Co-Prosperity Sphere in the south-side neighborhood of Bridgeport, was recorded live on reel to reel tape, and the complete, uncut recording is now available as the trio’s fourth album, Counterbalance.

On Counterbalance, the members of the trio bring to bear the collective creative experience they have accumulated over the past decade, displaying a new level of maturity in their interpretation of Mazzarella’s latest compositions—which draw as much from contemporary classical music as from the jazz tradition—and a new level of patience and communication in their highly personal improvisations. As critic John Corbett asserts in his liner notes for the album, the trio’s music is "magnificent, relaxed. It has nothing to prove. The sound is proof enough.”

When I first heard Counterbalance, I was a bit stunned. It made me think of some of my favorite saxophone trio albums: Ornette Coleman's Live at the Golden Circle, Air's Air Song, Charles Gayle's Touchin' On Trane, Joseph Jarman's Black Paladins. Not that the Nick Mazzarella Trio is taking cues from these, but rather that they are creating an indelible statement, breathing new life into a common form. As John Corbett observes in his liner notes, the Nick Mazzarella Trio has nothing to prove. Counterbalance is their fourth album in ten years. It is a beautifully recorded statement of intent, a snapshot of a moment in time, new music for a new decade. They don't care if you buy this record. They don't care if you know their individual CVs. They don't care if you've never heard of them before now. The music captured here is all that matters.

When I entered Co-Prosperity Sphere on January 19, 2018, I already knew it was going to be a special night. The Nick Mazzarella Trio’s first performance in almost two years, occurring in their hometown, celebrating a decade of activity, performing a collection of brand new original music before a packed house and being recorded live. The energy and anticipation was palpable. What ensued was a perfect display of the controlled freedom the group had become known for as a fixture of the Chicago improvised music scene—Mazzarella’s compositions providing the perfect vehicles for the band’s broad dynamic and emotional ranges, at once searching and focused. Limitless exploration performed with expert ability, skilled experimentation by masterful travelers. The audience was rapt. At the end of the night, as the tapes were transferring, I grabbed the headphones for a listen. Even having just witnessed the concert, I was impressed with the quality of the sound and the performance. I turned to Nick, “This is your next record!” I shouted. He agreed. I’m very happy to help present, in partnership with Mazzarella and Astral Spirits’ Nate Cross, the trio’s fourth album, Counterbalance.

Good ideas deserve to be explored as fully as possible, and the saxophone/bass/drum unit has been one of the most researched lineups in creative music. Nick Mazzarella Trio joined the investigation in 2008, and it's been a fruitful decade in the lab, as a working band/creative music triumvirate. Bassist Anton Hatwich and alto saxophonist Mazzarella have continued to reside in the ensemble's birthplace of Chicago, where they're both stalwart members of the creative music community. Meanwhile, drummer Frank Rosaly moved away a few years ago, setting up shop in Amsterdam, where he was immediately embraced as a part of that city's storied history of improvised music. But where some bandleaders would find such a departure an impasse in the growth of the music, Mazzarella understood that Rosaly's new horizons would offer something exciting to the music.

On Counterbalance, their fourth record, you can clearly hear the band's development. It was recorded live in Chicago on one of Rosaly's return visits, and I sense an expansion and deepening of the overall idea, something related to the personal maturation of all involved but also the trio itself. The band is cured, like fine charcuterie. Smoky. Delicious. Their music is magnificent, relaxed. It has nothing to prove. The sound is proof enough. Listening and offering and reacting and listening more. In Don Cherry’s formulation, the Nick Mazzarella Trio makes organic music. No chemicals, no pesticides, no preservatives.

All compositions by Nick Mazzarella (BMI).

Recorded by David Allen and Dave Vettraino on January 19, 2018 at Co-Prosperity Sphere in Bridgeport, Chicago.
Mixed & Mastered by Dave Zuchowski.

For Mary A and Nick J—Mom and Dad

Bandcamp Daily  your guide to the world of Bandcamp

Featured sounds by K.Spark and WIZDUMB, plus Basi joins the show to discuss his latest release.